Christin wanted to try and trample and crush inflatable objects like she does her slaves and toy cars. She got a few inflatables and she enjoyed crushing them. The experience was different from what she was used to but it was exciting nonetheless. She crushed them repeatedly until she was tired. It took more effort than she is used to but it was also a good work out for her.

Mistress Christin ordered for a gadget online but instead, she had a toy car delivered. She was pissed off and before she even realized that she had to return it and get the one she had ordered, she found she had crushed it in rage. She smashed it and crushed it using her sneakers and by the time she realized what she had done, it was too late and she had to order for another gadget.

Madame Marissa pranked in the office

Madame Marissa hates toys and her colleagues know it. They played a prank on her and left some toy cars inside her purse when she stepped outside the office. When she came back, she found them and she was furious. She went to the office store room and she used her high heels to crush them and make sure they were destroyed. She even used her bare feet not caring whether she would get hurt or not.

Mistress Christin was tired of crushing toys and guys so she looked for something else to crush for a change. She went out and got herself an inflatable toy and she used it instead. She enjoyed crushing it with her high heels. It was a different experience from what she is used to crush but she enjoyed it nonetheless since she loves adventure and enjoys trying new things every now and then.

Mistress Helena and her crush fetish

Mistress Helena is a hot mistress and she loves to crush things. She has a sweet smile and no one hardly ever imagines she can crush anything. But she lives for her crush fetish and she loves crushing things with her feet and her high heels. She likes to crush guys' balls but today she wanted to crush toys so she crushed the ones she saw near her apartment block and destroyed them.

Madame Marissa was tired of crushing toy cars so she decided to try toy trains. She went out and bought a few of them. Then she placed them outside and used her high heels to crush them. She was done in a matter of minutes as they were completely destroyed. But she did not care since it was not in her house and she did not have to clean up the mess.

Mistress Christin enjoys crushing things more than anything else. And she tends to prefer things which are a bit harder to crush like toy trucks. She buys the high quality ones which do not break easily. Then she wears her big black boots and then goes to work. She jumps and stomps on them and uses her strong and merciless feet to crush them totally. It only takes a few minutes and she destroys them completely.

When you are as bored as this mistress, there is nothing you cannot do to kill the boredom. She searched her garage and found some toy cars belonging to her nephew. She was in her socks but that did not stop her from crushing them. She did not have anything better to do with them so she just enjoyed crushing them with her feet. She made a fine mess with them after a few minutes.

Madame Marissa was told by her friends that crushing very small toy cars was the hardest because they tended to be stronger. So when she was driving, she came across a few of them. She pulled over and went to where they are. She used her high heels to crush them. They were hard at first but she was determined and within a matter of minutes, she had managed to crush them.

When it comes to crushing things, few mistresses are as good at it as mistress Lumen is. She likes to use her high heels to do her crushing and stomping. Combined with her strong feet and full weight, she usually crushes anything she wants in a matter of seconds. To demonstrate to her friend, she crushed a toy car in a matter of seconds using her black high heels as she watched. 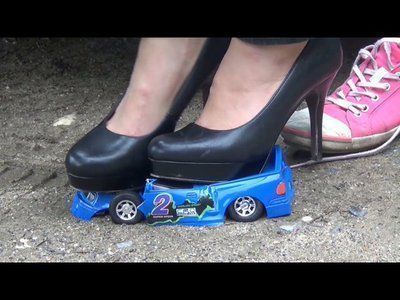